In his Autumn Statement the chancellor addressed the issue of housing in a way that could have some positive effect upon what is one of the most pressing issues in Britain to day.

Most of us over the age of 50 have benefitted well in the property market.

In our early years there were tax reliefs that helped the purchase. Inflation bestowed higher values on our properties without any increase in our investment and the wage increases during those years of higher inflation made our mortgage payments increasingly affordable.

Then Mrs Thatcher gave all people renting the right to buy their homes and the enthusiasm for buy to let took off. During this time population has grown … 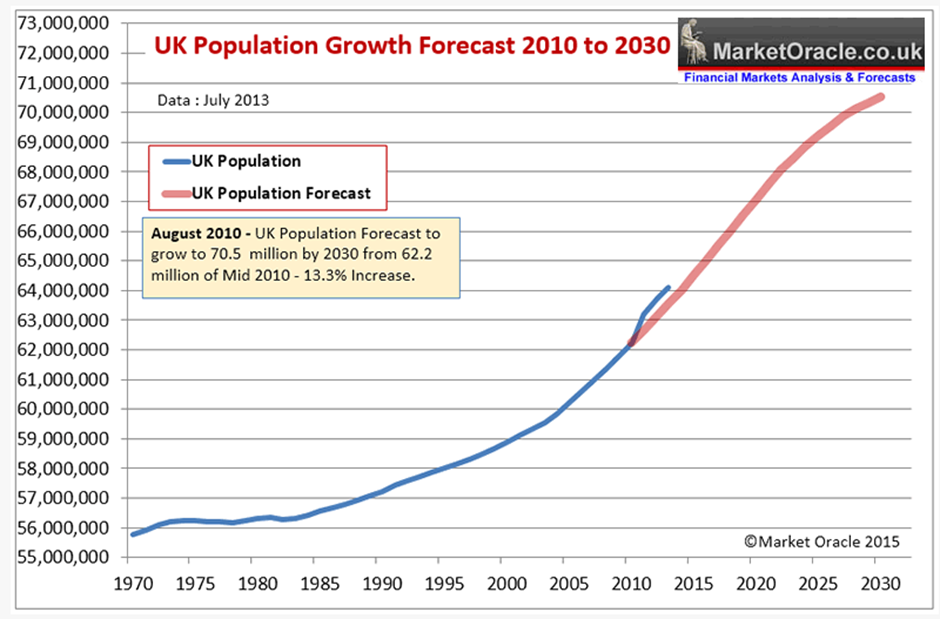 … whilst house building has fallen sharply 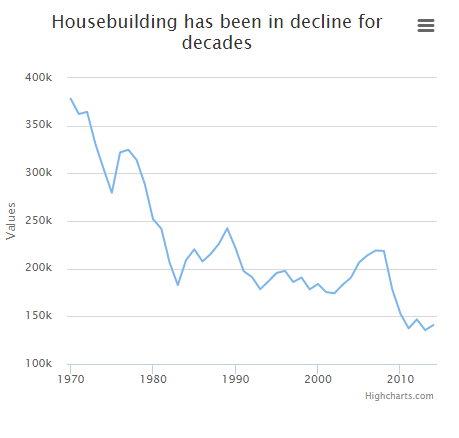 Also, owning a home has become little more than a pipe dream in some parts of the country.

The average London salary in 2013 was £30,479, according to the ONS. Compare that with the average London house price of £428,000, and it’s little wonder that many people struggle to get on the ladder. Prices continue to rise. The latest house price data show the cost of a home in the capital rose to a staggering £514,000 in July, taking the average price above the 4pc stamp duty threshold

The ONS calculates that the average house in London cost 14 times the average salary 2013. Ten years ago, it was ten times earnings. Across England, the house price to earnings ratio has increased from 10.4 to 11.8 over the past decade. In Wales and Northern Ireland, where house prices have fallen by 0.8pc and 46.7pc respectively, the ratio has remained broadly steady.

Mark Carney, governor of the Bank of England, has said that problems with housing are the “biggest risk” to the UK economy. The CBI agreed, saying: “A perfect storm is brewing in the housing market. Now is the time for action.”

There are too few homes, usually costing too much, often in the wrong places, and often of poor quality. The crisis damages lives, breaks up families, blights employment prospects, reduces mobility and slows the economy.

This, you would have thought, would be a gift for any political party.  Housing is a matter of vital importance to voters. At a time when all parties struggle to offer alternatives to each other, this would be an opportunity to be distinctive and take the lead. Yet all the main parties’ have failed to properly get a hold on this.

People who own property can make more money from sitting on it than by working. At the same time others will never get on the property ladder however hard they strive. This wouldn’t be a problem if there were enough homes in the right places. The most obvious cause of Britain’s housing is the simply supply and demand.

It’s hard to run a business if your employees find it hard to get a home. If people on low and middle incomes are pushed out, big cities will in course lose those who make, maintain and repair things, care for the ill and old, clean and cook and wait in restaurants, and who look after and teach children. Where will our nurses, porters and cleaners live if they can’t get a home close enough to their hospitals?

But, as we all know, submit plans for a development of new homes and the protests can be quite vehement. Protecting land is more important than providing a home for a person.

It is also too simple to say that Britain is short of land. “The notion that there is no land left really is nonsense,” says David Orr, chief executive of the National Housing Federation. “Nine per cent of the country is developed and that includes roads, factories and so on: only 2% is housing.” The challenge is rather to find places that do not affect somebody’s view, somebody’s dog-walking route and somebody’s property prices.

Take this from the Malvern Gazette this week:
Newspaper article here 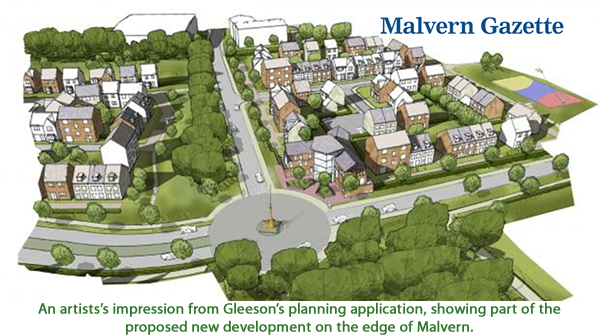 “A PLANNING application for one of the biggest developments in Malvern for decades has just been sent in to the district council.

Gleeson Developments Ltd and Welbeck Strategic Land LLP have put in an outline application to build up to 800 new homes on farmland on the north-western edge of the town.

The plan also includes employment land, a care home, community hall, a police post, shops and other facilities, as well as playing fields and green space.

The site, bounded by Lower Howsell Road, the railway line and Worcester Road, is allocated for housing in the South Worcestershire

Development Plan, and Gleeson’s interest has been known about for some years.

The developers say the scheme will mean an investment of more than £100 million in Malvern, and will create up to 1,400 jobs.

But opposition to the scheme is likely to be strong, with particular concerns being the effect on infrastructure, especially the road network, and the loss of farmland which currently provides a home to wildlife, including of skylarks, bats and foxes.”

The council is obliged to resolve the infrastructure problems so that is not a real issue. As for the wild life ask yourself what was displaced when your own home was originally built?

So far, the main government response has been to try to relax planning rules and to encourage the market with measures such as Help To Buy which, presented as much-needed assistance to first-time buyers, tend to push up prices further.

There is confusion between the problems of availability and affordability. If the only way to encourage building in larger numbers is to put up prices, this is no help for the people who cannot afford a home. The underlying belief is that the market will provide, if only it were properly stimulated and enticed, but it is one unsupported by evidence.

At no time since the Second World War has the private sector built at the rate now required, and usually it has fallen a long way short. The only time when the total housing numbers exceeded those now thought essential was in the 1950s and 1960s, when council housing accounted for half the figure.

Buy-to-let landlords and people buying second homes will soon have to pay more in stamp duty, the chancellor has announced.

From April 2016, those in England and Wales will have to pay a 3% surcharge on each stamp duty band.

For the average buy-to-let purchase of £184,000, that means they will pay an extra £5,520 from April 2016. And, of course, that also applies to second homes; don’t you have to ask how moral it is to have two homes when there are people who can’t even afford one?

The Help to Buy (equity loan) scheme in England will also be extended to 2021, one year longer than planned and will be interest free for five years.

This scheme includes an extra £2.3bn in loans for the government’s starter homes programme, and £4bn lent to housing associations and local authorities to build more homes for shared ownership.

Another £200m will be used to build homes for rent, which will allow tenants to save for a deposit.