Happy 2018
Christmas for the Oliff household was joyful, full of good food, excellent music and good conversation. Which is my idea of a good time.

To start the year,
I want to remind you of the benefits of using an
Independent adviser and why I continue to remain totally

Each client is special and is treated as such.

We are free to select from the entire world of regulated investments, protection and pensions.

Not only that but we have the skills and freedom to consider each client’s needs holistically, based on their particular circumstances and tax position; contrast that with whole of market tied advisers, who are sadly limited by product offering.

We also differ from the majority of other advisers, as we work purely on a fee basis, which means we do not have to find a product that provides a “provider facilitated fee”.

By keeping our cherished independence, we can find better solutions.

Please tell your friends and family, if you feel you can recommend us.

MifId ll, our new extra regulation, has meant some working over the New Year, to be ready for the 4th January.

We made it, thanks to help from Chris and our support services ThreeSixty. Please ask if you want to know more!

Here are three reminders of what we do for clients.

No one embraces the prospect of needing care.  It means being dependant, allowing others to take control and sometimes feeling vulnerable.

If you are used to living an independent and meaningful life, this is not a good prospect.  However, as with most things in life, approaching it with the right attitude can make a big difference.  If you have been living a lonely existence for years, since your partners’ death or your children moved away, it’s time to take stock, start making decisions and change your life in good ways.  Stay in control and let go of the things that hold you back and start looking forward again.

Despite being struck by a debilitating decease, in his mid-60s, Ray accepted that no cure was possible and said he was grateful that he lived in a country where his life could still be valued.

Ray became a client in 1994, when he was 56.  Introduced by a business contact and looking for help with sorting out his pensions and savings.  He had taken early retirement to care for his wife, Pauline, having had a very successful career with various major UK companies.   Pauline had cancer and was in remission, which meant he could go back to work as a business consultant.

Ray stopped work again, once Pauline needed him to care for her full time and, after her death, sold the family home and moved to a smaller property in 2002.

Having discussed the Inheritance Tax implications with me, he gifted £100,000 to his children and paid for a gift inter vivos insurance policy to cover the reducing IHT liability on the Gift *

In the summer of 2004 I noticed that Ray’s speech was becoming blurred, almost as if he had had a stroke. He was 66 and confided that he had been diagnosed with a brain wasting condition, the initial symptoms being his inability to safely walk through doors, without colliding with the door frame.  The condition got progressively worse, to the point when he was regularly falling.

He recognised that he would soon need constant care and expected to eventually need nursing care. We discussed ways of paying for that care.

His pension and investment income were more than adequate for his needs but the prospect of paying for full time care was a major concern, particularly as he could out live his capital.  The solution was a Long Term Care Plan,** something he thanked me for shortly before his death.

The contract started in 2005 and continued to top up his care fees, tax free, until his death in 2012.

Ray’s carers received income from 2005 and for the next 7 years.

To start with the care fee was used for care at home; once Ray moved to a Nursing home the payments changed and were paid to the home. Because it went to provide care, in each case the income was tax free, which meant a saving of up to 40% (20% for a basic tax payer)

For my part, I still enjoyed discussing politics and his investments with him until he was unable to move or communicate, which thankfully only lasted a short time.  He lived to see each of his grandchildren borne and made provision for them to be educated.

When a gift is made between two people (which is not, in itself, an exempt transfer) it will be a Potentially Exempt Transfer (PET).

The gift remains part of the donor’s estate for the next seven years. If the donor dies within seven years of making a PET, that PET will then become a chargeable transfer and could be subject to IHT itself and/or cause a greater IHT liability on the deceased’s estate.

If a PET does become chargeable on death, it is based on the value originally transferred – not its value at date of death. The PET also takes its chronological place for cumulation purposes in relation to earlier and later transfers from the time it is made. The PET will be charged to IHT at the rate of IHT applicable at death or (if lower) the IHT rate in the year the PET was made.

If the PET is fully within the nil rate band (NRB) there will be no tax to pay. Any tax that is due will be payable by the donee of the PET, but based on the donor’s seven year cumulation at the date of death.

Taper relief may apply when calculating the tax on the PET (see table below).

Any tax due on the PET will be reduced on a sliding scale provided that the donor survives for at least three years from the date of the gift. It is important to note, however, that taper relief reduces the tax payable; it does not reduce the value of the transfer for the purposes of the donor’s cumulation

Thus, when a PET becomes chargeable on death, there will be tax to pay by the donee if the PET (alone or cumulatively) exceeds the NRB.

The Gift Inter Vivos policy is a seven year decreasing term assurance policy which is intended to provide funds for the IHT that will be due on the donee should the donor die within 7 years of making the gift.

The policy is usually funded by a single premium at the outset. The sum assured decreases to mirror the IHT liability on the PET and pays out a guaranteed, tax-free lump sum if death occurs during the policy term. The policy is generally written on the life of the donor and in trust for the benefit of the donee responsible for payment of any IHT. The policy cannot be written on a joint life basis.

In addition to the above, on death within 7 years, the PET will use up all or part of the NRB. A seven-years level term assurance on the life of the donor could be used to cover the tax due. Again this would be written in trust to avoid it forming part of the taxable estate.

** Care-fees contracts ensure that an income is paid for life ,  it is paid tax free to the registered care provider giving both the insured and the care provider certainty.

Prior to 2008 it seems that very few of us ever wondered or cared about how our money was invested.

Were we financing the sale of weapons, helping the drug dealers or people traffickers to money launder or investing in businesses that exploited the environment and their communities?

The majority of advisers, bankers and city institutions were less concerned about such things and more concerned about outshining the competition with higher returns and bigger bonuses.

Most doubted it was ever possible to invest in an Ethical way; a way that makes money without exploitation.  Today I meet 20 somethings who take it for granted that investments are transparent and have good outcomes.

Investing is important, not just for you, my clients, but also for the enterprises we invest in.  In a year when wind and solar energy contributed more than ever to the country’s energy needs at 21.47% of the total. New technologies are developing 3D printing to produce replacement limbs and the world’s acute water shortages urgently need solutions, your investment decisions can help finance the solutions.

Infrastructure funds, for example are offering a return of up to 5%.  Our favourite water fund produced 12.2% in 2017 and these are just some of the developments our investors can benefit financially from.

At a time when easy access bank accounts are paying a 1.3%, one year fixed 1.85% (Money Savings Expert ), inflation at an annual rate of 2.7%, is providing savers with a negative return.

My middle of the road (not too risky) General Ethical Portfolio returned 7.27%, after all costs and charges) since April.  See chart below. : 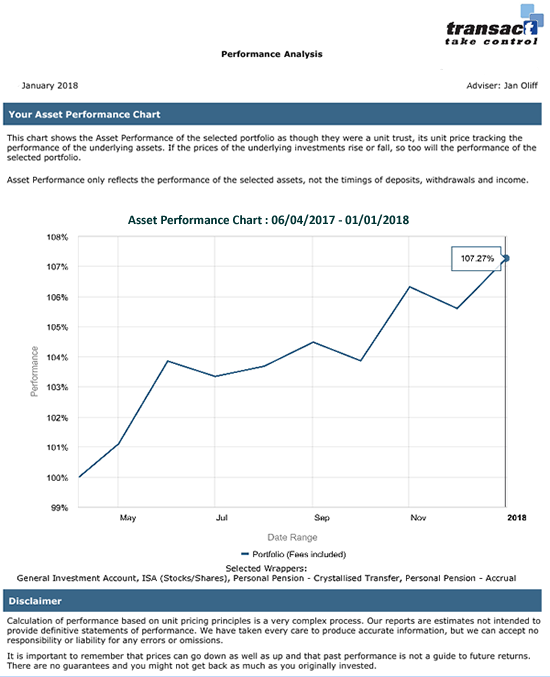 When Personal Equity Plans were launched, by Prime Minister Thatcher, she spoke of an opportunity to support British businesses.

In today’s globalised world, supporting good investments should be our focus.

One of the unfortunate outcomes from the Payment Protection scandal is that the lenders have stopped recommending protection contracts.

Payment Protection was rarely suitable for most people and situations, but it was cheap and could be included as part of a loan agreement without too much explanation.

On the other hand appropriate and tailored protection contracts required more effort and needed to be understood, both by the lender and the customer.

Unless you get independent advice when taking a loan, starting your family or taking on some other responsibility, you will not know what is available, appropriate and affordable.

You can, of course, ask me.